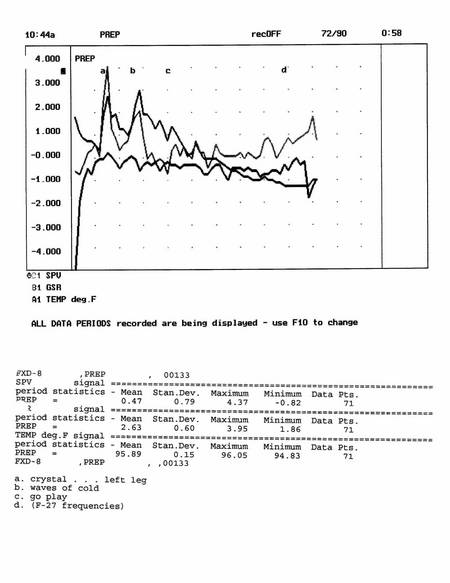 S: You were dancing the null, today.

F: Is that right? I forgot about the null.

S: Constantly flipping back and forth across the line. Dancing the null.

F: Well I was going to say it was a very strange session, and then I thought no, I probably say that every week. The blue is just going up and down, spiking all over the place.

S: Dancing on the null.

F: And the green is trending just – at the b, whatever the b is

S: Right, it’s just trending down, which is your emotional level. But the constantly flipping back and forth across the null, you know like walking between two worlds.

F: Is there a flavor of this experience, that you would say, yeah, that figures that you were crossing the null repeatedly?

S: Well, when I look at your chart I’m looking at hundreds of cases that I’ve seen, and so automatically in my brain there’s this comparative analysis that happens —

S: –and a lot of times when people dance on the null, it’s like they’re moving to a threshold, a knowledge, and they dip and they go, [gesturing up and down]

F: As though it shocks them back into the other side?

S: Or as though they kind of lose awareness and think that they have to bring it back. Sometimes it’s ego protecting them, saying “no I don’t want to go there,” and I was watching carefully for that in yours — were you talking and engaging your monologue as a way of preventing you to go there, and it didn’t turn out that way, because I would watch you go through a monologue of explaining something and begin to drift, as though the monologue was distracting you from something deeper happening. And then you would get into it and then you’d come back and describe it. A lot of it had to do with comparative situations. You’d get into an other-worldly perception and then try to describe it in worldly terms, and so you would flip between two worlds. And then there was much that you said, “well there was something going on here, and I’m sure I did it and I understood it at the moment, but now I’m clueless as to what that was.”

S: And those two experiences that you have just described are the swinging across the null point.

F: Pretty hard to bring anything home from that.

F: Is that what Joe [McMoneagle] does a lot? Does Joe – I forgot what my question was.

S: You just did it again.

S: I think that Joe’s experience in remote viewing is a bit different in that the experience of remote viewing is to try to fit everything that you perceive into a linear coherence, and he has over the years disciplined himself not to make that quantum leap. To just say, “these are the facts, and how they assemble together I’m not too sure about.”

F: How does he – or how could I, is really the question I’m asking – report the facts – because even reporting the facts was beyond me.

F: All right. And I’m more interested in the inter-dimensional thing. What happened here? My temperature dropped way down. Was that just when I stretched?

S: You stretched, yeah. When you physically move, of course, your capillaries are going to collapse.

S: You were warm.

S: But that – we’re getting a real good handle on the meaning of that. And you have again been asked, how can I make that happen? So you might try, in an office meeting or when you’re sitting with someone else, “welcome the cold, welcome the cold. I want it in me.”

F: There was a pretty major experience with this that happened between last week and now, and I cannot remember what it was. Anything else?

S: In terms of electric, you can see the readings are just classic, they’re wonderful. A dancing of the null. No commitment on one side or the other. A walking the line. And I’m not saying that that’s bad or that’s good or anything needs to be improved. It is a description of the experience you have, which was itself valuable, and I’d like to talk about some of the perceptions you’ve had.

Did you since you did this crystal bowl gig over [as I had told Skip prior to the session], did you happen to mention anything to them about your California trip?

F: I mentioned it to N___ who was there, but I didn’t mention it to the group.

S: When you were having your very strong perceptions about seeing E_ and G___ and like they were trying to attract your attention or something, it was in response to “is there a message about this”

S: About your trip, or anything like that. And I experienced very clearly G__’s face and the audio hallucination of her saying “Michael Landon, Michael Landon.” And so it’s like, I scribbled down some things. What does this mean? Does she have a message? And message wasn’t quite the right word, it’s more like she knows something about Michael Landon that she can tell you which will be a key for a conversation later, or something. So that’s why I wondered if you’d mentioned it to them, but it seemed very clearly to me. And so if you were to – this morning before you go back to your house – if you were to drive over there and say “do you guys know who Michael Landon is?” I have this concept that she would say–

F: something that’ll illuminate something.

F: Well [sarcastically] this is just coincidentally, Skip, I mean totally out of the blue, just by coincidence I happen to have something I was going to bring over there and leave in their mailbox. And I was thinking about doing it before the session, and I said, no, I’ll do it after the session.

S: So things might be on track. [they laugh]

F: No, but I’ll tell you that message I got was very clearly not that I will have help, but that we always have help.

F: Yeah. It was – there was no question about it.

S: Well, you were talking to the right guys, I guess. [they laugh]

S: What are the other comments I have? [pause] For the last several weeks, one of the common things that you do, and it’s actually one of the things that we teach here at Monroe, but it may be that it’s time to leave that behind, and that’s asking “why?” Why am I having this experience? What am I doing this? And so, in my own sessions, it was sort of an inappropriate question, it’s like “what a weird question,”; it’s like, imagine yourself riding a roller coaster, or making love, or eating ice cream: In the middle of this experience, do you stop and say “why am I doing this?”

F: I guess my assumption was always that the why would be a part of the experience, that it’s the, “okay you’ve had the roller coaster -“. Of course, there’s different times of asking. If the asking is distracting from having the experience, it’s one thing. Or maybe that’s what you’re saying. But – asking them why struck me as the appropriate thing to do!

S: And we teach that at Monroe. I agree. It seems to me, however, that that isn’t necessarily always appropriate.

F: And, it may be that I’m open enough to that, that I don’t need to do that. When something happens to me, my impulse is usually not to say “well this is a strange thing that came out of nowhere,” but it’s usually to say “okay, why? What’s the deal?” Try to be aware of it.

F: But maybe it’s getting in the way.

S: But you’re cresting the hill of the roller coaster and you’re just going over the top —

F: I would definitely be saying why, Skip!

S: and you’re zinging down and you’re waving your hands and you’re full of excitement; this is not the time to say, “so why am I having this experience? What is the deeper metaphysical meaning of this at this moment?”

F: Exactly. however, that’s true of a lot of my life.

S: And you seem to have discovered, or worked out, or analyzed, something about this headache stuff, and water and so forth and so on.

F: Yeah, that was very interesting.

S: I want to introduce a possible side-bar, over here, and that is that I hear –[chuckles] (We’re going to talk about the use of the word I, and I keep hearing myself say I) – I listen very carefully to the words used, as though there might be metaphorical symbology or things between the lines here, and because I’ve seen it many times before, when there’s talk of one’s eye —

S: It can mean the letter I and not eye. And so I was looking for things and one of the things you said is “my eye is out and exposed and vulnerable,” and then later on there was a concept of something for protection of the eyes

S: I’m only suggesting when you go through your tape again, try to listen with different ears to “am I trying to tell myself about, this is a big trip, Frank’s on the line here? This could be it for Frank? Is my `I’ really setting out there?”

F: Well, well, well. I haven’t any – we haven’t [they laugh] – haven’t any doubt both of those are true because I know that physical part is true; I mean, I can’t prove it, but I know it’s true, but that rings true too. That rings very true. And of course I am on the line in that sense. That’s interesting. It’s a terrible thing to be encouraging you completely toward puns… .