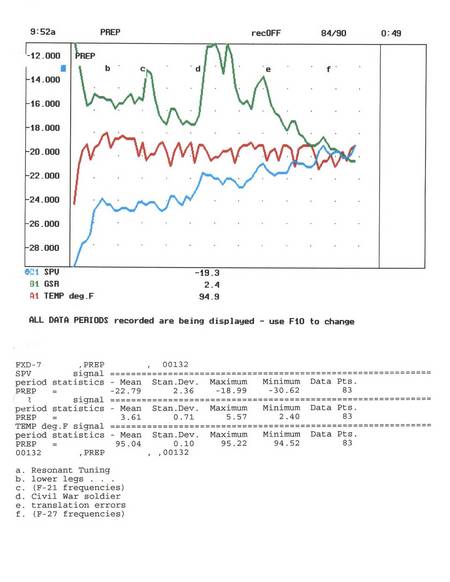 F: Well, I sure hope your tape recorder didn’t crap out, [laughs] because that was a – an interesting session! And you can imagine how much of it I have at the moment.

S: Well, you had a perception that this was a pretty short session for you?

F: It wore me out on the one hand, and on the other hand it felt like the time just flew. Like, I remember, seems to me like I started that thing with a huge burst of words about something or other, whatever I was talking about – it was like a data dump, you know. And then, putting it together now it seems to me it must have gone on longer than I thought; it seemed like it just went on for maybe five minutes.

F: Well, rational brain tells me it was probably about 50 minutes, but it just seemed about half or a third as long as the last sessions.

S: I’m interested in that concept of how people perceive those concepts of differences in time. You think it was about half the length of your previous sessions, on the one hand. On another hand it seemingly was ten minutes.

F: Of course, now that I think about it, the other ones were longer than normal, weren’t they?.

S: It’s a fascinating concept that time – wasn’t it Deepak Chopra says, if you could just escape the illusions of our perception of time passing, we’d stop aging and everything else.

F: Well, I know that I’ll feel like a lot of time has gone by, and it’ll just be a couple of minutes, I’ll realize later, listening to the tape. But I’ll be in la-la land there. [yawns]

S: So time is relative–

F: Even intellectually I thought 50 minutes.

F: Yeah, they’re absolutely opposite; the green line’s dropping and the – well, again, there’s a lot of reporting going.

S: Right, and it’s just coming back in, talking, and getting excited about things, then dropping down, dropping down, but down here, I thought this was very very interesting down in this zone, because the talking was intruding less, that is you were staying with the perception and not stepping back an analyzing “what is this I’m perceiving, anyway, and how am I going to explain it to anybody?”

F: Oh, and that’s what they wanted me to do, and so I was doing it. So in other words you’re saying there was as much talking there, but it was getting me less out of the state.

F: All right, I know how to do that now! Just as I learned how to get the stuff cooler. Okay. Well, that’s good. And now, I had predicted in the beginning that I would go across the null state. We were nowhere near the null state.

F: –although it continually moved —

F: Well, I was working hard on that. That’s before resonant tuning, right? Or is it —

F: Boy, that’s unlike every other one we’ve had, too. Remember, the last one had a U shape, it went like this.

S: Yes, right. You had some shifting down situations.

F: Now, at d, which you said is civil war soldier, I think that’s when I was —

S: That’s when you began to talk about perceiving the civil war soldier and then you began wondering about the knees and all that stuff.

S: [laughs] I thought it was an eloquent way to say you were confusing about – you started out with this 27 explanation, and then you went way out here on some other tangent, and then came back and say, “oh, so that all fits into what I was trying to tell you about 27, and that there are translation errors, not only in terms of focus 27, but here; our feelings about what we think is really going on here is also translation error.

F: Yours, not mine. [they laugh] They often, I notice, do that. Like if Bob and I would ask them a question about the business, they go all around Robin Hood’s barn, and it turns out it wasn’t wandering around, but they were just sketching in —

F: I’ve had this sense about the book, though. I think there could be another book in this. And they said, just hang it on my own experiences, it’s an easy way to tell it. Cause otherwise, where do you start?

S: Yeah, I mean that’s all you know anyway.

F: “I’m about to tell you about life, the universe and everything. Let’s start back before the so-called big bang.” All right. Anything else that strikes you? The temperature doesn’t seem to vary too much.

F: And I seem to remember saying that in the beginning, that’s what was going to happen. Try to happen, anyway. Well, that’s good. Now I’ll have to listen to it again to find out what it was I actually said, because it’s really gone. It felt deep. I’ve never wanted to skip 15 before, you know, “let’s go up to 21.” They said it’s like – no, you know what? Kelly told me that, years ago, now that I think of it. I had some channeled manuscript and she said read it out of 21 and I said why and she said ’cause it’s closer to the energies that wrote it.

F: And at least consciously I had forgotten all about it, but that’s basically the same stuff.

F: Before you say that, can I tell you that I had at one point a very distinct impression of you talking to Fay about the session? Which is fine with me, if that happens. I don’t know if that crossed your mind or not, but I got real – like a little light bulb.

S: Okay. It was probably important that you say that in sequence here. In Neale [Walsch]’s book, he talks about an unusual discrepancy in saying to ourselves, “I would be fine if I just had more money; I would be much better if I just had another job,” and he tries to explain that that style or type of philosophy is backwards, in that it is by realizing how right things are in this moment — that’s where it’s at. And when Fay and I [silently nodding in acknowledgement of the previous comment] talked about this issue, one of the most dramatic, most outstanding illustrations of this was that Fay would say to me, “I want to heal. Ever since I can remember, I’ve always wanted to heal, and that’s why I became a nurse, because I really want to heal.” And I said, “well you know, based on Neale’s book, what you’ve done?” And she says “well no, what do you mean?” I said, “well that affirmation, that prayer to God, has been immediately granted, and you have been able to go through your life seeing sick people all your life. Because to say, I want to heal, means that you carry along with you, “I must see others as being sick.” If I am affirming, “I want to heal, I want to heal.”

S: Now in that same genre – I’m not off-subject here–

F: [laughs] I’ll give you the same latitude I give the guys.

S: In that same genre, I see you talking to me weeks ago about wanting to do sessions in the booth; that you were seeking inspiration.

F: Mm-hmm. Was it needing, or wanting? Because wanting would even be worse!

S: Yes. Wanting. Wanting inspiration would be worse. Because that would be saying–

S: –and your asthma’s going away.

F: I’m not talking to them anymore. [laughs] I’m going to hold my breath til I turn blue. [they laugh] Oh, isn’t that funny. Inspirations. And they made a big thing – I remember this now that you mention it, of inspiration versus thinking, of the logical plodding, which is necessary, as opposed to stuff that’s being given to us. Or we’re giving to ourselves, or however you want to put it.

So basically you’re telling me you’re bored with the whole process.

S: It’s so wonderful. I treasure so much being a part of this.

F: I think the recording of all this is important too. I mean of transcribing. A lot of work, but I think it may – when I finally get to the end of it, then we’re going to go back and look – because nobody would listen to the ten tapes and be able to hold it in their heads, but you can read it and hold it in your head.