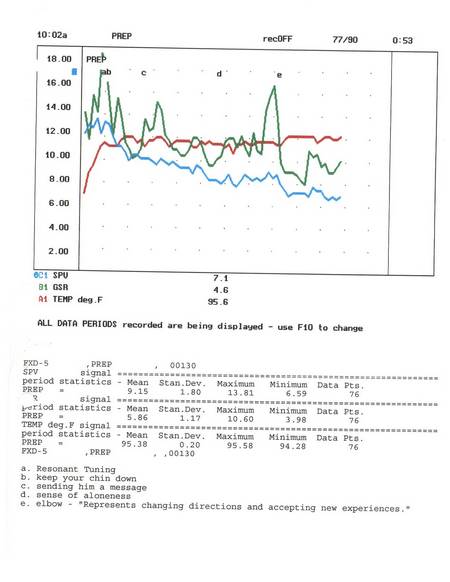 [While Skip is in the black box, unplugging me.]

F: So. That was a different session.

[In the control room]

S: Not according to your printout.

F: Are you going to believe me, or some instrument you never met?

S: This physiology is pretty straightforward. No mysteries here. Temperature warming up, and blue line shifting down as you shifted in consciousness, deeper and deeper into the focus states, and the green kicking up when you would talk and get into a big soliloquy and then you’d drift back down and come back up and back down. “E” is where you moved because of your elbows, there. But it’s pretty straightforward; I mean, you’ve seen enough of these. The blue line shifting in consciousness, red line warming up to physical relaxation, and the green line kicking up as you would talk.

F: Strictly because of my talking.

S: No. Uh-uh, because the blue line kept on going.

F: It sure didn’t feel like I was being pulled out of it. Nowhere near the null point today, though, I notice.

S: No. Uh-uh. [Pause] But if you’d been in there three or four more hours you might have – [they laugh]

I wanted to ask you about your first perceptions here, keep your chin down. What did all that mean?

F: And so, in fact, I kept it like that and I spoke leaning downwards for quite a while, and then I forgot about it and I don’t know whether I continued to do it or whether I went back, you know, facing ahead again.

S: And you said you wanted to remember the idea of keeping – not sticking your chin out.

S: Yes, and that’s what I wanted to talk to you about.

F: What is it? Let’s see, what’s that metaphor mean? Keep your chin down? That’s for a boxer, isn’t it?

S: Actually, no it’s larger than that. Actually, I think that if you look at the idiomatic expression to which it refers, rather than that as a word itself, when a person behaves in a no way that they stick their chin out, it’s kind of a challenge of “come on buddy I dare you, you can’t hit me, you can’t hurt me, or I dare you,” and you’re sticking your chin out so there is an idiomatic expression called sticking your chin out.

F: yeah. That doesn’t quite resonate though, because it wasn’t the difference between doing that and this, it was —

S: but you used those words, sticking my chin out. And then you went into talking about how the breathing was easier and everything.

F: all right I’ll have to look at that.

S: so I wanted to ask you about that. But then also the elbow and your concentration on the elbow, and so I looked up in the book and the elbow represents changing directions and accepting new experiences.

S: well the idea that there was an elbow experience, something having to do with your elbow, so I was wondering if there was a message there.

F: now what happens here, I see a and b right next to each other, of course. And after me, it dropped. Well, wouldn’t that be in the middle of resonant tuning, then?

S: what is the b note up here?

S: right. They were very closely together, obviously, because it was during the process and sell it wasn’t until after you went into silence, it was here, and then in focus 10 frequencies you started talking again and then dropped back down.

F: I felt like I talked to a tremendous amount in this session, not like the last one.

S: yeah, you’re going to have a heck of a time [S and F together] transcribing it! [They laugh]

“Send him a message.” Oh, Bertram? The monk?

Do you used to do these same kind of measurements when you did remote viewers?

F: you didn’t ever measure anything, did you?

S: yes, again, physical motion would kind of goof things up. The big thing with remote viewing comes down to the fact that we know that the body knows and it gets bollixed up when they try to objectify it or analyze or describe is where the issue is, and so in the game of remote viewing, it’s like how do we turn the volume up louder, and it may be it’s like, you don’t need to turn the radio louder, you just need to have better way of expressing it out. I mean, this is one theory.

One theory is that there are several tests that show — like evoked potential responses and GSR responses — your body knows when it’s getting psychic information. Moving it from the unconscious body knowing to the conscious realm requires neural processing through preprogrammed belief systems and so forth and so on, and that’s where the data gets bollixed up.

F: that’s where your static is in the system.

S: right, or noise in the system. So it isn’t as though I have to turn the psychic signal up louder, I have to do something —

Now this is all in one theory or concept of how it might work, and Ingo [Swann]’ resolve for that was to have a predesigned structural objectification system. The people who believe more in the meditative type are more the ones kind of like, “quiet down the outside noise so that the ratio of the volume is higher.”

So there are two different schools of thought of the way to tackle the problem.

F: yes, and they’ve both got their points. It would depend on what the particular person’s belief system was — not the one choosing but the one actually doing it.

F: after all, that’s what you’re doing here. Turn down the external volume so that people can actually listen — at least that’s how I always explain it to people. And then after that, once they realize that the signal was there, then maybe they’d be able to do it a different way.

The thing with the elbows, very interesting. That’s what you think, huh? Changing directions.

F: anything else in the session?

S: I didn’t know whether there were any topics or things that you wanted to talk about.

F: I’m glad you remembered the book. It’s funny — this whole session, practically, I don’t know that I remember anything that was said. If you mention it I might.

S: it was coming pretty fast.

F: and even the thing with the cover copy – they gave me the attitude from which to get it. I don’t remember now what it was.

F: but they gave it to me, and I thought, yeah we can deal with that from now on, that’s all I need.

S: I think this is a very nice way to try to deal with that, when you tap into that creative process, because now it’s 10 minutes later and you’re in a different state of consciousness, and it’s like this state-dependent memory — also on tape, fortunately in this case.