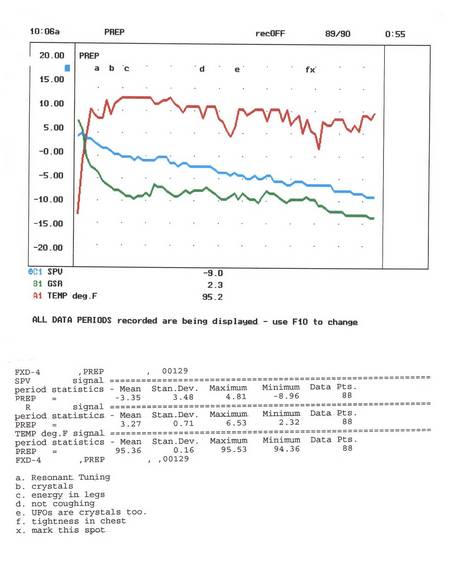 S: You did excellent, as a matter of fact. I very much enjoyed your session.

F: Especially the part where I was snoozing there, right?

S: Well, you were very deep and you, you know, said, “oh well I was off daydreaming,” and it’s important to pay attention to those periods of time and what was going on on the fringes of consciousness, on the fringes of awareness. As you can see from your electrical pattern here, your immediate warm-up, which is quite typical; you did just fine. And your emotional responsiveness, just a classic line curving right down but peaking up a little bit when you talk, going down more when wouldn’t, and shifting across the null point quite rapidly, in focus 10 and focus 12. You know, when you look at it now, it looks like it was destined to shift way down here, but at the time I was saying, “come on, Frank, let’s go, a little more,” you know. So —

F: This represents the null point? The zero?

S: Yes, the zero and that was the null point.

F: This is, I think, the first session where we shifted across, isn’t it?

S: Yes. The letter c here is “energy in leg,” which is right here, and was about right up here, about halfway to d, where we got —

S: Right. Here is when you crossed over. On our new equipment we’re not going to be able to mark like this. Little events. I’m going to kind of miss that. But we’ll be able to take screen snapshots, which might substitute a little for the event markers.

F: Any significance to this drop in the temperature there?

S: Sometimes that can be you adjusting your body position —

S: And so just by scooting around or turning your hands a little bit, the temperature will drop back.

F: Now, I didn’t realize that “mark this spot” was right after “tightness in chest.” It seemed like there was a long way away.

F: The time was real distorted.

F: But there’s nothing really special to be seen, is there?

S: No, other than on the screen – again, these are all averaged out, and I’m watching second by second what happen – and there was a dip and then a return, but I don’t know if that was you going “oh mark that spot” – you know, because your physical movement could have done it too. But no, I didn’t see anything other than after that, is when you went very very very very deep.

F: Really beyond the point of bringing anything back and talking about it.

F: Oh, you mean – Are you saying there were comments there that I shouldn’t have been able to hear in the booth?

F: That you recorded out here and not in there.

S: I can record out here and have you not hear it. And it will be quite obvious, like you’re making some point about something and I punch you out and record “so Frank, when you’re telling me about this, I’m wondering whether that is significant to this, and I wonder what that means about that,” and so it’s not recorded. But then, when you were gone, I said, “okay, it’s time now to be moving back and move back through this and move back through that, and you didn’t hear any of that.

S: But it’ll be obvious. Part of you heard it, anyway.

S: But I found this to be a very nice session, and with some a very informative things. I have had a similar kind of thing which I may have said to you before, about, the idea of thinking about crystals inside of a geode. And inside the geode, each six-sided crystal is shoulder to shoulder, so to speak, with another six sided crystal, and it is only together, then, that they form the geode shape, which is a wholeness.

F: That’s the idea I was trying to get across, yes.

S: And I also wanted to – I wish that I knew more about how crystals develop. In one way we talk about crystals growing, and yet we don’t consider crystals to be a life-form, and yet it’s as though – if there are three states of matter, there is liquids, gases and solids, and then we speak of the fourth state of matter, which is called plasma. We rarely speak of the fourth state of matter, and when you hook them into earth, air, fire and water, fire becomes the plasma side of the house. And so we speak of animal life and plant life – and then there are crystals. It’s like the other thing. It’s something that grows and yet we don’t imbue, or say that it has any life-force, whatever that might be, that we attribute to everything from amoebas to plant forms to vertebrates to man. And yet it does grow. And so I was very interested and hoping that there was some insight – because you were asking about these things coming together in your life and crystallizing in the sense that there was a metamorphosis or growth of a different character or nature involved in these things coming together in your life at this point, and I was thinking about how crystals themselves evolve and become greater in what for me is a mysterious way, because I don’t understand how it happens, and yet they do become larger and eventually emerge or float to the top of the earth mass and become this thing we call a crystal. And they have a certain frequency or vibration to them and yet they don’t classify it as a life form, so it’s an evolutionary growth of a different sort.

F: And I suspect that everything is alive anyway, and so it may have its own consciousness. I mean, I tend to also think of them just as trans – not as transducers, but – transmitters. To carry the energy out. But actually, that’s assuming they don’t have their own consciousness that interacts with ours. Which is probably not true. Certainly Richard is convinced – and I know a lot of people are convinced – that crystals themselves have the ability to affect your consciousness just by you being there within its presence; he says about 11 feet. And he’s quite definite about it: he says, put a big crystal in the room and it will help concentrate your thinking. That’s what he says. I’m going to get a couple for our conference room and see if it makes any difference. Everybody’ll go to sleep. {they laugh] Have a conference in focus 27.

This did just what I hoped it would do. I thought last week that I learned the trick of just dropping down, right at the beginning, but I didn’t want to say anything because it might not have been. But I think I have the trick, so I should be able to do it from now on.

F: And that, of course, might even be useful outside the prep session. [they laugh] What a radical thought.

So the new equipment won’t take this kind of a verbal snapshot, but it’ll take a —

S: Yeah, these are called event markers, and in the new software design, they don’t allow for event markers. But we’ll figure something out.

S: Well apparently in – these kind of instruments are normally used in the biofeedback world. This equipment is 12 years old. Apparently as the years passed and rolled by, there wasn’t a great need in the greater biofeedback community for these kinds of event markers. We use this equipment differently that the vast amount of people.

F: It’s funny to think of them destroying a capability, but they probably didn’t do it that way, they just didn’t include that because they were doing something else.

F: Anything else that comes to mind? Something that comes to my mind is that the temperature has always each time – the average has been 95-something.

F: Anything else come to mind?

S: No, except I very much enjoyed this session. I thought that, you know, we decided in the beginning to do a number of sessions so that our communication between each other would be easier, and kinds of things of expectation on your part would have a chance to burn out, so that you could open up, and I think that this is the beginning of that happening–

S: That’s right. I don’t expect any less of you from now on. [they laugh] We used to say, “now that you’ve been promoted and we’ve given you a pay raise, we’re of course going to expect a whole lot more out of you.”

F: Remind me, what’s the feedback for me in your having an enjoyment of my session. Wait a minute. Go have your own session.

F: Okee-doke. I’ll give you as usual a transcript when I get around to it. I’m enjoying that, I think it’s a valuable part of it.