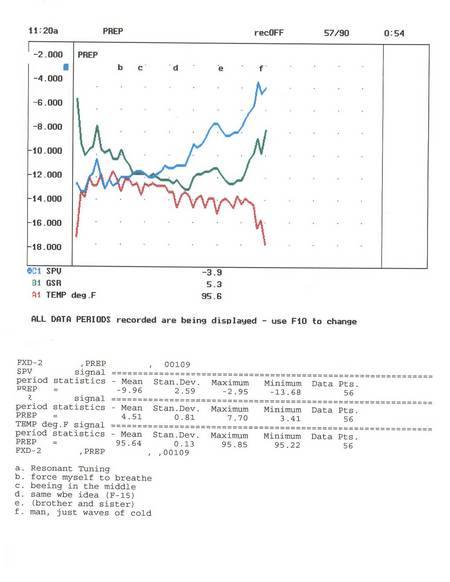 S: It was soft and gentle. Nice session, good reporting. You were on your way someplace until your bladder got to you. [Examining the graph made of the electronic record with me] You see your temperature warmed up here just fine, little ups and downs are little blush responses I told you about. And your green line came down just fine. That’s resonant tuning, and back down just fine, till the end when your body tightened up and your GSR came back up because of your bladder. But interestingly enough, just about where d is on the note here, something began to happen; you began to move in a direction, and then eventually you said “this is cold, it’s getting really cold,” and there was definitely a movement. Before you began to report and experience it, there was a definite sense of direction here, as to where you were headed. And I think you were going to go really well, until right here, and then your body tightened up with the bladder.

F: Yes, and the interesting thing is, there wasn’t all that much urine in there; it was just this incredible urgency, and it made me wonder-

F: Well, it happened quite a bit earlier and I sort of like just paid attention to it interestedly rather than taking it as it was, and for a while I could do that and it was just “okay, well that’s the way it feels,” but then toward the end it just became impossible.

S: Well I think the kinesthetic experience of the cold and wherever that was leading – I don’t think we’re through with that.

S: That was when you were trying to compare the concept of the web and the sponge and “I was in the middle of my relationships with people”–

F: Now, I don’t see here what you had last time, where you said there was a discontinuity.

S: That’s correct, there was not the discontinuity. This was a very usual session, with a sense of deliberate direction, and then a collapse at the end with the bladder. I thought this session was very smooth, and very gentle. There was less anxiousness on your part, there was good gentle reporting; every once in a while, you know, you get very analytical about something, and then you realize, “oh, I’m being too analytical.” I think that that will rub off after a while.

F: What, the analytical? It’s better off to be less analytical at the time?

F: I see. Well, I suspect that the Antarctic thing, we’re going to hear more about that, because there’s no rational explanation for how interested I am, or my conviction that we’re going to see it out from under the ice, or some of it. That thing about b, what does b look like to you? Because, it was so interesting, I was so relaxed, I was actually having to force myself to lift my chest up

S: But you have to be very careful about the things you think you’re experiencing, because the brain will play tricks on you. Technically speaking, you can only have a consciousness of experience with something with which you are familiar. You have to have –

F: Something to relate it to.

S: Right, something to plug it into. “Have we ever seen anything like this before? Yes, this is what it is.” I don’t know if you saw the movie about the newly sighted? A 30-year-old man who hasn’t ever seen before in his whole life, and they did an operation on him and gave him sight? And the curious things like shadows: He wouldn’t walk across a shadow, because he didn’t know if it was okay to do that or not. The idea of depth perception and things – whole new realms with which he had no way to know how to experience things. Well, we’re into the same thing here; we’re exploring out in consciousness, and there are some things that are just click-outs. There’s no way to explain this, so you have zero experience. And then there are other things like the cold – it’s not an experience of cold, your temperature was 95 degrees —

F: That was my assumption even then.

S: Right, and so Mr. Analysis was in there figuring that out —

S: but that doesn’t make the cold any less real!

F: Well, to me it’s important because it goes, “well no wait a minute, this isn’t really cold, so this is some kind of an other–

F: [laughs] But that would be me, immediately. But I knew – I even asked you, but I knew that it wasn’t my temperature going up and down like that, and yet, that whole thing was prefigured, that business about the sheet. [While getting me set in the black box, Skip asked me if I wanted a sheet over my feet, and I had him put it over me.] I almost said yes to the blanket, but said, “nah, that doesn’t make sense.” But if I hadn’t had the sheet on me, I know I would have said, “it’s because I don’t have the sheet on me.”

S: And yet your body temperature was 95 degrees.

F: But you know, I always remembered, you told me years ago some woman was reporting having heat flashes while she was in the black box, and the temperature never moved, and you said that your hypothesis at the time was, if it’s unfamiliar phenomena, we try to attribute it to something.

S: Exactly. “Find an assignment for this.”

F: Well, this is very interesting. So you thought that was a good session.