Part four. The target, and why

This is the target.

The Shaker dwelling-house bathroom at Canterbury bespeaks communal life. The sister who lives there placed the rocking chairs in front of sinks perhaps on a whim. 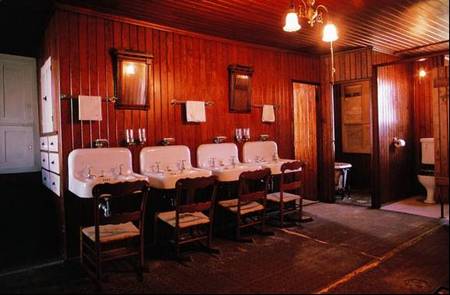 Does this look like the Alamo to you? If so, I have a bridge I’d like to sell you. And yet, look at how many elements that I had described are in this picture.

* A reflective surface.
* Parallel lines seen from below, like roof beams, coming out from something (the wall).
* Wood, for sure (though I had suspected that “wood” was analytical overlay).
parallel lines
* Repeated metal tubes, either hollow like pipe or rollers, or solid
lines that met at a point (which I correctly interpreted to be walls meeting)
* Beige color
* Parallel slanted lines representing daylight (which were actually reflecting light from an uneven source)
* The wavy line that I took to be a roof (which actually turns out to be the tops of the rocking chairs)
* Rusty color, brick color
* “Feels comfortable — wouldn’t grate on my nerves”
* “Something about it that I like”
* Feels like a metal pipe
* (even the impressions of a bird or birds soaring might be my mind trying to make sense of those two bright lights at the top of the picture, though I wouldn’t lay any particular weight on this point.)
* That reflective item in the picture that I was tempted to call window, but carefully described merely as reflective
* More or less square or oblong enclosure
* Historical site (though not in the American southwest)

Few of those items were in the other pictures.

Yet if my sketches and accompanying descriptions pretty accurately reflected what I was perceiving beneath a sensory level, the story that I made out of those elements would do nothing but mislead. It was a striking lesson — one that Skip had already driven home several times — that words come out of a different place (left brain, so to speak) than sketches.

I think this example also demonstrates that in fact remote viewers do make contact with reality at a level far beneath anything the senses can apprehend. I did not pick up so many elements of that photograph merely by chance. My analytical errors stem from inexperience in interpreting such input, and presumably could be greatly reduced by practice.

On that memorable Wednesday, among us we did 24 remote viewings, in three shifts of eight people, acting in turn as viewers, monitors, and judges. Of the 24, 8 were first-place matches and an additional six should have been first-place matches save for judging errors, as the panel of judges recognized as soon as they saw the correct answer. A matching rate of eight in 24 would be little better than chance, but 14 in 24 is far beyond anything that should happen by chance. Statisticians know how to score this, but I don’t, nor do I need to.

Now, we can’t go bragging that we made 14 first-place scorers when officially we made eight. Yet I think we all went home feeling pretty good because of course judging was a skill to be learned quite as much as monitoring or viewing, and some learning curve was to be expected.

More to the point, we did not need statistics to tell us that the process worked. There is all the difference in the world between reading about something, or hearing about it, on the one hand, and actually doing it yourself on the other. Just as with every other psychic skill I have investigated over the years, I’ve found that the reality diverged significantly from my expectations yet converged in the direction of greater, not lesser, importance.

It certainly was an interesting experience.